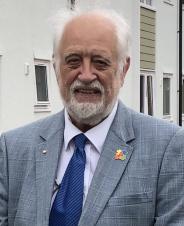 Kevin has been the elected Leicestershire County Councillor for 26 villages in the Gartree Division since 2001 covering the Billesdon & Tilton (part), Glen and Kibworth Wards. During his time as a councillor he has held a number of senior positions, including Cabinet Member for Better Access, and Cabinet Member for Finance, Resources and Property. He has also had a spell as Cabinet Support Member for Highways, Transportation & Waste, and as Cabinet Support Member for Adults & Communities, plus six years as a Scrutiny Commissioner from 2011 until May 2017. Between 2018 and 2020 he was chairman of the Health Overview & Scrutiny Committee, and in 2019, chairman of the Joint Health Overview & Scrutiny Committee i.e. including Leicester City & Rutland. He was re-elected as county councillor for Gartree in May 2021 and elected to be vice-chairman of the county council and is due to become chairman of the council in May 2022.

He has lived in 'Harcourt' since 1992, and lived in 'Beauchamp' for 16 years before that. He has been attending parish council meetings in both villages, as an observer, for well over 20 years. In May 2015, Kevin was re-elected Chairman of the Kibworth Harcourt Parish Council having first been elected in August 2014. He is a parish council representative on the Kibworth Neighbourhood Plan Group and Village Hall Committee. He was co-opted also to Kibworth Beauchamp Parish Council in 2019.

He was chairman of Kibworth Harcourt Conservation Society before it was disbanded in 2019 and is a Committee Member of the Kibworth Improvement Team (KiT). He was a member of the Local Governor Board at Robert Smyth Academy (part of the Tudor Grange Multi Academy Trust) in Market Harborough for over 25 years. He has an amateur interest in history and has researched the history of the Rectors of St Wilfrid's Church from the 13th century. He is the secretary to the Kibworth Parochial Church Council.

Representations of Committees and Boards